Learn about self-service BI and common pitfalls you should avoid when deploying self-service BI in your organization. The article provides guidance to business users and IT professionals alike.

To BI or not to BI

That’s not really the Question

At the time of my foray in the field of Information Systems from Accounting, Business Intelligence was known as Executive Information System or Decision Support System. While much of BI is still geared towards executives and managers for making decisions, today business intelligence is unleashed in real-time to non-managerial employees to make quick decisions on their feet. These can range from product recommendation to cross-sell, up-sell and volume discount offers during a seemingly casual web chat on an eCommerce website.

With BI flowing through the veins and arteries of an organization today, it’s clear that BI is becoming as ubiquitous as ERP or CRM. With the advent of self-service BI and Microsoft’s push for Power BI, users are no longer just recipients and consumers of business intelligence, but they can now generate powerful business intelligence themselves.

What is Self-Service BI

In a recent SQL PASS online event I attended, presenter Brian Knight did a superb job of describing how an end-user can employ familiar tools to obtain business intelligence. The presentation used a real-world scenario of selecting a geographic site location for a fictitious healthcare organization. Brian started with collecting data by scraping publicly available web page from Yelp.com for existing medical centers in the area. Then based on census demographic data he “zoomed in” on the most suitable ZIP (postal) code for the potential new site. He concluded the demo by “flying over” the map giving a bird’s eye view of the site. It made a great demo as the scenario had practical application, which illustrated self-service BI and highlighted the key capabilities of Power BI.

Self-service BI is here and now. But because of its simplicity and familiarity, it is especially important to understand its pitfalls, and know how to avoid them. So, here we go…

How not to Self-Service BI 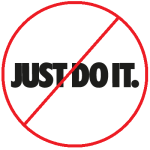 Test, before running with it!

The first and probably the most important acronym I learned when learning to program, was GIGO – Garbage In. Garbage Out. Contrary to what Nike told some of us couch potatoes, the word of caution with self-service BI is don’t just do it, but test, test and test again before running with it. As self-service BI gains ground, organizations need to be even more vigilant to ensure that the information flowing within and through the departmental walls continues to be accurate and reliable. An undetected error in a formula calculation could lead to decisions detrimental to the bottom-line or the reputation of an organization. We all make mistakes… business users, software engineers and even rocket scientists! A simple math error of assuming Metrics instead of English measurements had caused NASA to lose a $125-million spacecraft. (OK, they were actually called “spacecraft engineers” not “rocket scientists.” But you get my point.) For a self-service BI application to become a department-wide or corporate-wide application, it’s important for it to go through the same rigors of software code review, quality assurance and user acceptance testing, as conventional BI solutions.

The single-most important mantra of BI is to deliver “single version of truth” across the organization. It is critical that your corporate communication on key performance indicators has zero ambiguity, at all levels of your organization. You can’t have one department computing a KPI with one formula and another with a different formula. For instance, operations manager at a manufacturing plant may allocate a value of scrap recovery to product sales, which would artificially inflate the product’s gross margin. Similarly, a hotel manager may compute hotel occupancy by excluding out-of-order rooms, which would artificially inflate the hotel’s revenue per available room or RevPAR. But good luck convincing the CFO to adopt those calculations across the organization! And, imagine the confusion caused by different values of the same KPI! 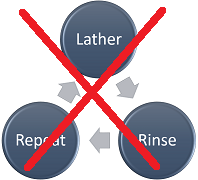 When building your self-service BI prototype, it makes sense to manually extract data from disparate data sources, identify entity relationships, transform values and perform calculations, all from your desktop computer. However, once the initial prototype is built, it’s tested and validated, and you need to repeat this exercise periodically, then you’d want to automate the process. And, that is true even if it is possible (and may even be cool to some) to export millions of rows of data into Excel right from your desktop. Psst… computers were invented to do mundane repeated tasks any time of the day or night. If your self-service BI entails a manual routine of “lather, rinse, repeat,” such as extracting/uploading data, tabulating/charting, etc., then automate the process. Even if it’s something you do once a year, like manually uploading a budget file, automate the process. This will save time and avoid errors. Use your valuable time and creative genius in analyzing, making decisions, and executing them.

Your operational systems are mission-critical for efficiently serving your customers, employees and business partners. It is important to ensure that these systems are alive and kicking at all times. Your self-service BI extracts during business hours can negatively impact the performance of these systems. Sluggish systems can ultimately result in longer lines at a service desk, not to mention annoyed customers and frustration among customer-facing employees. Automate and schedule your large extracts during non-peak hours, when fewer users are reliant on the system. For near real-time data analysis, use the point-in-time snapshot of your operational database, which is physically separate from your operational database.

No matter how powerful self-service BI can be, it doesn’t change the basic principles of deploying BI; you can’t ignore the basic questions: “Is it accurate, relevant, consistent and current?” If the answer to any of these questions is NO, then it’s time to go back to the drawing board. With self-service BI, you also need to ask: “Is the process of obtaining BI efficient and cost-effective? Is it accessible to everyone who can benefit from it?”

Ashu Shendé is the Managing Partner at IQubz, a BI consulting firm based in Southern California. Contact Ashu via LinkedIn or by writing to ashu at iqubz dot com.

IQubz (pronounced "I-Cubes") is a registered trademark of IQubz LLC in the United States and other countries. Other product and service names mentioned and logos displayed on this website are the trademarks of their respective owners.